Our ports of calls also included Ireland – Dublin was our first Irish city.

I don’t know what I was picturing, but it wasn’t true.  Dublin is a huge city with skyscrapers, horrible traffic and all that. 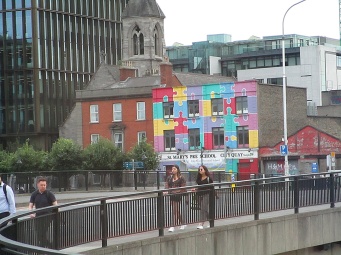 It seemed that every road the bus driver took, you could see this colorful building.  I have no idea what the building holds, but I would like to think it is a toy store. You can’t tell by this photo, but each colored block is shaped like a puzzle piece.  I will probably do some research about it in my spare time.

Our next stop was Phoenix Park, the largest enclosed public park in Europe.
The building was not a big deal, except they had a large sign with our granddaughter’s name on it. The Queen’s garden had unique and downright weird plants. I knew my girls would like to see the Dragon’s Tongue!

We went back into Dublin for an afternoon tour to see “Traditional Irish Entertainment” The adventure took place in a pub, no less, and everyone got to drink a Guinness, I had Sprite Zero, and we watched a lass do some Riverdance moves.

Then, the talented lass, one Jean Kennedy•, decided we could be taught a few ‘mild’ dance moves.  Your welcome for sparing you any photo or video evidence of this complete mess.  A lot of giggles and fun was had by all. 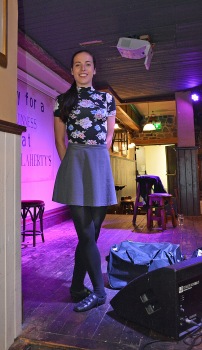 P.S.  It was not until I zoomed in did I realize the Irish “phonebooth” was supposed to be a cell phone. Ha!

In January, daily prompts are posted, and the goal is to write a post every day. Maybe even a podcast if I'm back home in my studio :-)