It all started when I took Ziva for a walk this morning. Actually, it was a case of her dragging me down the street. Crap! I said to myself, we need to start all over!  She and I were making good progress before I had dental work and was out of commission. Now she just wants to run and sniff everything. She refuses to focus on me and insists on doing her own route. It took every ounce of strength I have to keep my feet under me.

I needed to put an end to her misbehavior ASAP. It was time to whip out my secret weapon that makes even the most ADHD afflicted puppy focus and do what they are supposed to do.

These little goodies are super easy to create. You put only 4 ingredients into your food processor, blend well, and spread into a greased cookie sheet and bake @ 400F for 15 minutes. Piece of cake? Of course not – we are talking about me, remember?

First of all, a pound of chicken livers – frozen, needed to be thawed. While the container sat in lukewarm water I prepared the other ingredients, assembled my food processor, worked on a crochet project. Hubby was working with the Sheriff’s Dept all day, but it was afternoon and I was in a hurry. Hot water worked much faster.

I forgot there was so much blood in livers. I knew if I poured the little blood-sacks out of the round container, into my processor, blood would spill out and splatter the counter & myself. So I got a big fork and stabbed and shook the livers off the fork , well inside of the processor’s vessel. I felt so proud for not making a mess!

At this point I thought the worst was over. HA! What an idiot I can be. The recipe was easy, but the gross factor was over-the-top. Imagine livers, blood, flour, corn meal, and milk, in a blender. Yuck, is right. When I thought everything was mixed well, I got a spatula and began pouring the “batter” into the greased cookie sheet.

The bloody mess did not pour. It was so sticky that I ended up putting on disposable plastic gloves to scrape it off the sides and spindle of the processor, clean off the useless spatula, and smash the stuff into the pan using my palms. It was not pretty.

After (very carefully) removing the gloves outside in, I put the pan into the pre-heated oven and set the timer. Now I could get off my feet for 15 minutes and rest, I so stupidly thought.

After 7 minutes into the bake cycle had passed, a hideous odor began to take over the household air. Oh man! I jumped up out of my recliner and turned the fan over the stove on the 2nd level. The first level is all we use because it is loud, but not like an airplane engine that #2 setting sounds like. Level #3, if you’re interested, has been likened to the Space Shuttle launches.

The noise woke up the puppy, and you could read her expression as it went from “Oh, what is that scary noise?” to “WHAT IS THAT WONDERFUL SMELL??”  She bounced all over the kitchen with her snout high in the air, taking deep breaths and drooling.

I was going from room to room, opening windows and turning on ceiling fans. Going out to the garage for something, then re-entering the house, was like walking into a wall of crap. Skunks all over the county were jealous of this heavy and cloying stench emitting from my kitchen.

Then I remembered the Christmas presents I got last year. At the time I thought “how will I ever use up all these huge scented candles?” I now knew the answer. As I lit a candle I would put it somewhere in the kitchen and family room area. Now puppy had a mix of candle scents and liver to sniff and don’t forget the airplane engine over the stove. Both of us were nearing our breaking points when I turned off the oven and switched the fan to level #1.

#1 was only on for the 20 seconds it took for me to open oven, remove pan, and sit pan on stove, close oven door. #2 fan was reinstated, as lessened smell became my top priority – replacing quiet.  Puppy was not happy about this, but she braved the scary noise for her priority – LIVER. She ran circles in the family room, then suddenly stopped, running into the kitchen to circle me, whining, then run back to the couch and start over again. I was torturing my poor baby!

Again, I mistakenly thought the worst was over.

Recipe said to let “it” cool, then cut into small squares.

CUT?  With what, a jackhammer!?  I had to resort to a butter knife and attack from underneath to get only the top layer.

The knife and the spatula I used are permanently bent. The “treats” were in no way squares, they reminded me of wood-chips – except for the smell.  At least the cooler they got, the less they smelled.

An hour later, which made a 2-hour adventure so far, I called time. I was done. I wanted to throw the ‘livered’ cookie sheet away, but I’m just too practical for that, so I scrubbed and soaked every 10 minutes. The extra soapy dish water, if you are wondering, made the stench return. I know I have new wrinkles from scrunching my face up.

Hubby got home an hour later and asked me if Ziva and I had a séance while he was gone. Candles were still all over the house.

I could not wait to try the treats on our walk this morning. I’m sad to report that even these tried and true treats (that worked well with our former puppy) did not focus Ziva’s attention at all. We did not even make it out of the driveway pleasantly, and she knew I had LIVER!

So, here we come in the front door – Ziva’s is happily wagging her tail and greets hubby. I am in the midst of an asthma attack (forgot to use inhaler before we left) and tears are streaming down my face. ” I can’t even take my dog for a walk,” I whined. “We both need the exercise. This is supposed to be fun, but it’s NOT!”

Later that afternoon when hubby returned from running errands, he handed me a chain linked ‘pinch’ collar.

“It’s time.” he said. I nodded my head in agreement. Ziva will turn 1-years old on Sunday, and she was not behaving any better. It was time for some tough love around here. 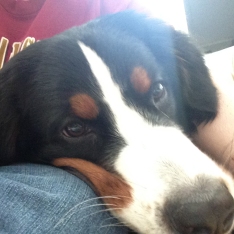 Sometimes You’re Caught in the Printer 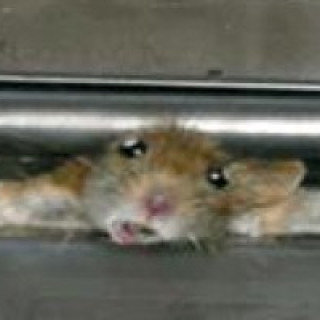