No article of clothing condemns a person more than the hooded sweatshirt (a.k.a. hoodie). Worn with the hood over the head and obscuring the face of the wearer, practically screams, “I’M A CRIMINAL!”

And the hoodie is an equal opportunity garment. Ethnic backgrounds do not matter. Wear a hoodie suspiciously (i.e., hiding under the hood, when it’s not raining) and people will avoid you. They won’t even look your way.

Only small children can get away with hoodies – small hoodies with bright colors or depicting animated characters are not considered a threat to society. It is toddlers in general, that people should be afraid of, but that is another topic for another day.

You won’t be mistaken for a criminal if you wear a hoodie inside. Why would you want to wear your hoodie inside? You ask.

Well, take a look at this guy. He is not a criminal. He could be the smartest man on Earth!

Have a wonderful Wednesday!

I have very sensitive skin and I hate the way garment tags are always scratching & making me itch. In the old days if a tag bugged you, you simply borrowed your mom’s seam ripper out of her sewing box and removed a few stitches. Wa-Lah! Problem solved.

Things have changed. Not only do you have an annoying tag that is double sewed into your garment, but you may have 3 or 4 of them. Apparently one tag is not enough to convey all the manufacturer wants you to know. This information is so critical that they sew it not once, but twice into the garment.

Last week I bought some new “skinny” jeans. Even though I knew the size they claimed to be was a lie (I have never, nor will I ever be a size 4), I felt so svelte & sexy.  I changed into them as soon as I got home from the store, called 2 friends and made them guess what size jeans I was wearing, curled up on the couch with a good book and some snacks – hey I was skinny, I can eat! An hour later the jeans had to come off. I could not take the tags anymore. They were terrorizing my skin and I just wanted to scream. I think I did scream.

For a half-hour I painstakingly removed the little tiny stitches, and the ones under those, to free my fabulous new jeans of their gnarly parasites. After all that toil, the tag was still attached to my pants. They must be sewing them in 3 times these days. I sigh deeply and loudly cursed, then proceeded with my task. I spend another 15 minutes removing the little secret stitches, which by the way held a seam together, so now I have an hole in my brand new jeans. Oh- and yes, the tag remains.

Maybe you know this already, but I was naive and believed that I was only dealing with thread here. But no. The BASTARDS are now using GLUE. Tags are sealed to the garment by gluing them after they are sewn in. I still fume when I think about it.

OK, we get the fact you want the tag to remain with the garment. But why can’t you make a tag that is not scratchy? The garment is not scratchy, so obviously you have the technology. And what is the deal with tags so large you can write the Constitution on them? Or the five, count them five, tags sewn into one small (size 4 don’t ya know) pair of jeans? Three in the back, one in the front, and one on the outside seam below the hip.

The only person who sees these damn tags is me, and I am not happy with whoever made the garment.

And I know who you are. You made sure of that, didn’t you?

I am talking about material things.  Specifically my dearly departed mother’s things that she left.

My sister and I spent half the day trying on clothes that were too small for us. Mom was a very petite woman, but there were a few things we hoped would fit us since we had lost some weight last year. We were wrong. The awful truth was I had put some of the weight back on. This was painfully obvious seeing my undressed self in the floor to ceiling mirrors that cover mom’s closet doors. Gag.

I just lost my mother. A huge storm battered the outside of the house. Sis and I are overwhelmed with legal crap to take care of, as well as moms things. Many, many things.  I was already depressed, and now I am confronted with flab.  We didn’t bother to try her size 5 shoes on. The woman’s shelter residents will be very well dressed. The size 6 petite women, that is.  However, everyone there can have a new purse.

You think you know pretty much everything about your mother’s life. Then you find things that make you blush. Mom was even more interesting than we already knew. I can’t wait to snoop in the other half of her closet tomorrow! 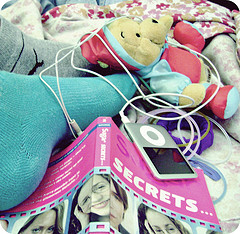