Oh, sure. We travel, relax, go for walks. We putter about the house, doing this and the other. We also join Guilds and get on Facebook more than we used to. Young people think retirement is one big Yawn-Fest, and old people are a bit “off”.

Young people can be wrong.

I’ll let you in on a little known fact: Retiree’s are so excited they don’t have to go to work anymore, they go through a “silly phase”.  Their children begin to worry about their mental state, and their grandchildren think they are the most fun people in the world.

That’s what it’s all about – fun. More like FUN.  Anyway, to give you an example of the type of silliness I’m talking about, I will tell you the story of the two bears.

Hubby and I were doing some Christmas shopping in the big city (of Manteca) and saw a large container full of stuffed bears. Huge Bears.

Apparently, the bear world is not so different from ours.  As you can see, these bears are bigger than I am, not to mention my grand-daughters. Even better, you should FEEL how plush they are. I had to get these for the girls. I couldn’t wait to see their faces when they saw them.

The Bears were too big to wrap and they would not fit under any of the beds. All closets were full of boxes of stuff to organize later.  Soooo, we just kept them in the family room. Now, here comes the silly part – we (hubby and I) played with the bears. That’s right. We even giggled like little kids. I would put hubby’s glasses on Mr. Bear.  They often watched TV together.

One time, I put them sitting together on the couch holding hands.

Before I got around to taking a picture, hubby snuck in from his shop and changed their position. When I went into the kitchen, I caught a glimpse of what the Bears were doing  in the family room!

(I did remember to take a photo) 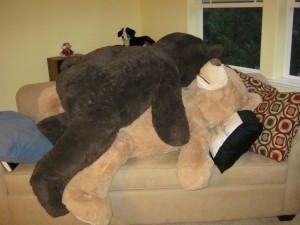 Well, this turn of events required an equally surprising response.  And it got one.

And yes, they are living happily ever after…

2 thoughts on “What Retired People REALLY Do”

The Bluebird of Grumpiness