I apologize to Jules Verne for borrowing his title.

I believe that Jules would have given me permission to use it for this post (had he been asked). During the 1-hour hike down 16-flights of stairs, into the bowels of Mercer Cavern, and back out again, I kept thinking of that movie, Journey to the Center of the Earth. Probably because that was what we were doing. “We” consisted of hubby, his visiting brother & sister, and their spouses. Our 11:30 tour consisted of six relatives and one single guy, who didn’t say 2 words the entire tour.

Our Guide, Amber, had been giving tours of the cavern for 3-years. She could answer all our questions – but we rarely had any because she was excellent at giving us the background and the details about the cavern. This became detrimental to our “resting” time on the tour. I was needing a rest after 4 flights and of course I wanted to look around. I don’t know about y’all, but I found it hard to sight-see while hanging on and looking down at my feet.

Walking into a dark hole in the ground was so weird. The stairs were very steep, and cramped.  No one wanted to go first, so we deferred the privilege to single guy. Hubby decided to go next and I followed.  Hubby is way taller than I, so I pretty much had a view of his backside until the first “rest” area. Don’t get me wrong, it’s a nice view, but that wasn’t what I paid to see.

As we slowly made our way into the bowels of the earth, I was grateful that my bootylicious arse fit between the two handrails. It got a bit iffy going through the tight spots, especially the tight spiral staircase we had to climb.

I am not a fan of heights, and I found out that day, inside the earth, that I was not a fan of under either. The narrow and slippery wooden stairs were close together and awkward to descend. Sturdy hand rails, made from steel pipes and wrapped thickly with black electrical tape made our perilous journey almost safe.

There are small “platforms”  separating sections of stairs that we could use to rest briefly. Amber took advantage of these to tell us more information and history about where we were.

Amber is a young and speedy girl. We all pushed ourselves to keep up with her because Amber was The Keeper Of The Flashlight. And caves are DARK. Amber showed us just how dark by turning off the cavern lighting and then her flashlight. Very spooky, even when you know in advance the lights are going out. My eyes kept trying to focus on nothing so I closed them.

Mineral deposits had grown and formed into mind-boggling shapes. Some looked like lasagna. The angel wings were cool, but I don’t have a photo of those because my Bro-in-law did not take any. I’m not complaining – at least somebody remembered to bring a camera.

Then there are the ones that inspire nightmares. I’m pretty sure  Stephen King took this tour before writing his novel  “IT” , which happens to be his scariest novel ever! 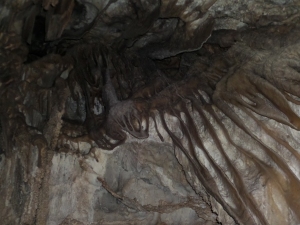 If human hands touched these beautiful formations, they would die. The calcite is alive, and it grows. It doesn’t grow quickly. The mineral formations are thousands of years old and they have not changed much at all.

Every now and then, a wet drop would hit the top of my head.  I wondered if the cavern had bats living there and they were pooping on me, but it was just condensation, according to our expert (Amber).

As if I didn’t have enough heebie-jeebies to begin with, I started thinking about earthquakes and all those rocks and minerals falling upon us and crushing us to death. Such a lovely thought at 16 stories down. I was shocked (we all were) to find out that if you were down inside a cave when the “big one” hit you would be safer there than anywhere else.

Yes, I know.  I don’t understand the physics behind that either…

I think the owners altered the brochure and website photos. Some photos show people walking down on rocks, and climbing up on the mineral formations. Those things are forbidden inside the cavern. It was also forbidden to have any items with you. Purses, bags and other carry items had to be locked up in the car. I thought that the people running the cavern didn’t want tourists dropping things. Once we began our decent into the earth, I realized that both my arms and hands needed to be free so I could hang on (for dear life).

The brochure we read did not show the stairway inside the cavern. A smart move on the owner’s part. Oh, and you have to swear an oath that you will-not-touch-anything inside the cave except the handrails.

You couldn’t pry my fingers away from that rail with a crowbar.  😉

3 thoughts on “The Journey To The Center Of The Earth”